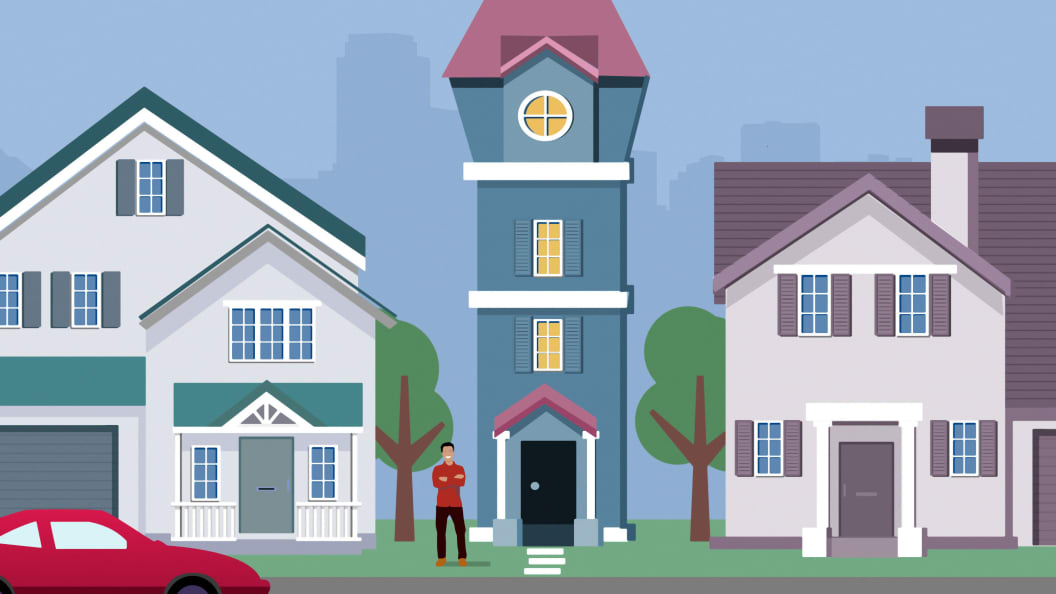 You think you have a tendency to be spiteful? Until you’ve seen these houses, you don’t even know what the word “spite” really means.

We’ve all heard of tiny houses and fixer-uppers, but have you ever heard of a spite house? They’re just what you might imagine: a home built just for the purpose of being spiteful to another person, like an annoying neighbor or ex-spouse. Though the trend recently came into the spotlight because of one particular couple, it’s one that’s actually been around for quite some time.  Get ready for a visual history of America’s pettiness from coast to coast, because there’s a lot to cover when it comes to our nation’s most famous spite houses.

Have you ever wished you could plan out some grand, spiteful gesture to get back at someone who wronged you? Well, these people who actually did it are about to become your new idols.

In a 2015 essay published in The New York Times, writer Kate Bolick talked about a fantasy of hers that might seem pretty strange to most people: owning a derelict, baby-pink house sitting in the middle of a salt marsh with no running fresh water. The house, which as Bolick describes as a “lonely, unloved thing looming against a howling sky,” seems like a terrible house in a terrible place, but that was actually the reason why it was built in the first place.
Kayana Szymczak/The New York Times
As the story goes, in 1925 a woman agreed to divorce her husband on the condition that he build her an exact replica of the home they owned together. However, she didn’t quite specify where the home should be built, and that’s where her husband got his revenge—by building it far away from everything she loved, in a place he thought would surely bring her sadness.
STPH Gallery
The house still stands today and, although it’s filled with lead paint, asbestos, and radon, members of the community don’t want it torn down. It’s currently owned by the Parker River National Wildlife Refuge which, for now, has spared it from being demolished.

Though it’s been gone for quite some time, the Richardson Spite House is thought of as New York’s most famous one. In 1882, a landowner named Hyman Samer decided he wanted to build some homes on land that he owned, but noticed a small strip of land between the two lots he owned. He offered to buy the land from its owner, Joseph Richardson, but Richardson was offended by just how low Samer’s offer was.
Valentine’s Manual of Old New York
To spite his low-balling neighbor, Richardson not only refused to sell him the land, but he also built a structure just five feet wide on top of it to make it that much more unusable. However, the building only stood until 1915, as it was so narrow that a reporter once had to be rescued from the stairwell.

Around the turn of the 20th century, a man named Charles Froling was dreaming up grand plans for a plot of land he had just inherited. The city, however, wasn’t on board and took a piece of the land to build a new street in the town. After dealing with such a cold move from his city and his uncaring neighbors, he decided to take a little revenge on both by building a house on the remaining land.
Wiki/Elf/Creative Commons
It took up the remainder of the plot he had left—just 10 feet wide and 54 feet long—and sat flush against not only the street, but his neighbor’s property, too. It’s even rumored that the word “spite” was worked into the front stoop of the property when it was built.

You know you’re dealing with someone pretty vengeful when they not only purchase land next to someone they hate, but they also make the effort to move an existing house to that plot of land. That’s the exact story behind the Nevada Spite House.
Janis Masyk-Jackson
When a miner in Virginia City, Nevada, decided to build his own home with the money he had saved, his enemy immediately began plotting on how he could use the situation to his advantage. He eventually bought the plot of land next to his nemesis’ house and actually moved his own home onto the land and situated it as close to the property line as he could get it. For the current owner’s sake, we hope they get along with their neighbor.

Who knew all those people in Massachusetts were so spiteful? Much like Boston’s Skinny House, the Cambridge Spite House was built as the result of a bad offer for the land it sits on. However, in this case, it was the owner, Francis O’Reilly, who made the offer and the neighbor who turned him down.
Wikipedia Commons
O’Reilly apparently wanted to sell the land because of its small size and, when no one would take it off his hands, he decided to make them regret it by building a 308-square-foot house on top of it. The structure is actually still standing today with an interior decorator living inside, who is said to have compared it to living inside of a billboard.

If there’s ever been a group of people who’d somehow not enjoy a rainbow-colored house that promotes equality, it’s the members of the Westboro Baptist Church. Thankfully, someone put one right across from their headquarters as a way to remind them of the message of love that the Church so vehemently rejects.
Of course, church members claimed they were thankful that the home was there to bring more attention to their cause, but we’re happy to say that the attention is mostly negative. Since the rainbow-painted home was revealed to the public, visitors from all over the world have taken trips to get pictures with it, leave flowers, or just share stories with like-minded people they meet there.
Equality House

You might wonder why this house has “pie” in its name when it looks like a rectangle, but an aerial view helps explain why. The house is actually shaped like a triangle, 15 feet wide on one end and a mere 55 inches wide on the other. It it said that it was built after the landowner received an insulting offer for his land, although another legend says it was built by a man’s ex-wife after he gave her the measly plot of land in their divorce settlement. Regardless of size, this home is still worth a pretty penny, Zillow reports that this house sold for a whopping $500,000 in 2016.

We’ll file this one under “people we never want to live next to.” In 2001, city officials cited the owners of this once-normal-looking home because they said there were too many people unrelated people living there at once, in addition to receive constant complaints about noise and parking violations.
Not ones to take it sitting down, the people who lived there decided they’d annoy the city—and probably their neighbors—by painting the house a bright purple color. Oh, and they added smiley faces and mouse ears, too. However, you won’t see them today, as the residents of the Purple House eventually settled out of court and agreed to comply with the city code, which included returning the house to its previous color.
Written by: Jul 19, 2017  Megan Senseney
neighborsspitefulgesturesspitehousestinyhouses
Related Articles