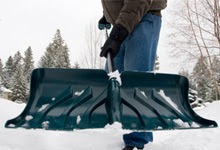 Using Reasonable Care to clear snow and Ice is a vital ruling. While most laws governing real estate date back 100 years or more, the Massachusetts Supreme Judicial Court changed long-standing rules governing the duty of property owners to clear snow and ice in a 2010 decision, Papadopoulos v. Target Corp. For more than a century, Massachusetts law had been that property owners could not be found liable for injuries due to the “natural accumulation” of snow and ice.  Under that old rule, if an owner chose not to clear snow and ice from the sidewalk or parking lot, it was a valid defense that the injury was caused by nature, i.e. by a natural accumulation of snow and ice. Only where the injury was the result of an “unnatural
accumulation” could an owner be liable.

According to case decisions, “unnatural accumulation” of snow and ice included such things as: the effects of footprints in the snow; ice melting from gutters that refroze; and ruts from a car or plow. Since the Papadopoulos decision, that is no longer the
law. Every owner now has a duty to use “reasonable care” for the protection of visitors. According to the SJC:

“We now will apply to hazards arising from snow and ice the same obligation that a property owner owes to lawful visitors as to all other hazards: a duty to ‘act as a reasonable person’ under all of the circumstances including the likelihood of injury to others, the probable seriousness of such injuries, and the burden of reducing or avoiding the ri – Under this traditional premises liability standard, a fact finder [judge or jury] will determine what snow and ice removal efforts are reasonable in light of the expense they impose on the landowner and the probability and seriousness of the foreseeable harm to others – The snow removal reasonably expected of a property owner will depend on the amount of foot traffic to be anticipated on the property, the magnitude of the risk reasonably feared, and the burden and expense of snow and ice
removal.”

What the Court Didn’t Do:
The Court did not set a bright line test that explains how much time an owner has to act; did not indicate the effect of the temperature range; and, did not state what depth the snow must reach before any action is required. Whether the property is a single-family home, apartment building, or shopping area, each case will depend on its own
facts to determine whether the owner acted reasonably. Even if an owner cleared the snow from the sidewalk within hours after a storm, but later the snow melted and refroze on the pavement, the owner will need to sand or salt, or face the risk of liability for negligence.

In its decision, the Court reasoned that the distinction between natural and unnatural accumulation has always been difficult to define and that a property owner would not likely have relied on the old natural accumulation rule in deciding whether to clear walkways, stairs, and parking lots, or in obtaining insurance coverage for slip and fall injuries arising from snow and ice.

Just The Facts:
The facts in the Papadopoulos case were as follows. At 11 a.m. on December 20, 2002 Emanuel Papadopoulos was injured when he slipped and fell on a patch of ice in the parking lot of the Liberty Tree Mall in Danvers in front of a Target department store. The temperature was below freezing, but it was not snowing or raining. The parking lot had been plowed and was essentially clear, although the plaintiff did notice scattered snow
and some areas of ice.

Papadopoulos parked his car in a handicapped space beside a raised median strip. In clearing the lot, the snowplow had deposited a pile of snow on the median, but the plow
left some snow on the ground by the edge of the median. After leaving the store, Papadopoulos slipped on a piece of ice that had frozen to the pavement. The ice on which the plaintiff tripped either had fallen from the snow piled on the median or had formed when snow melted and ran off the pile and then refroze to the pavement of the parking lot.

Papadopoulos sued Target as well as the company hired to clear the snow and ice. The Superior Court judge concluded that, whether it was a chunk of ice that had fallen from the median or a patch of refrozen runoff from the snow pile, the ice that caused the plaintiff’s fall was a “natural accumulation.” The judge concluded that, as a matter of law, Papadopoulos could not prevail on his claims of negligence. Therefore, the judge allowed the defendants’ motions for summary judgment, dismissing all claims without a trial.

The Appeal:
Papadopoulos appealed the Superior Court decision. The Supreme Judicial Court granted the plaintiff’s application for review. The Court eliminated the absolute defense that when injuries are due to a “natural accumulation” of snow and ice, the injured person could not recover. On the other hand, liability of a property owner is not absolute. To recover, an injured person must prove that the owner failed to use “reasonable care” and that failure resulted in the injury.

Papadopoulos’ negligence claim was sent back to the Superior Court for trial. The Court also ruled that the new standard will apply retroactively. Even so, proof of negligence will be required. In similar personal injury cases in Massachusetts, it is the burden of the injured party to prove that the owner was aware of the condition and failed to act reasonably to correct it or that sufficient time had passed that the owner should have been aware in the exercise of reasonable care.

What Property Owners Should Do:
Among the steps that every property owner should take are to:

If complete clearing is not possible, warning signs may be appropriate. However, even with such precautions, snow and ice claims are possible.