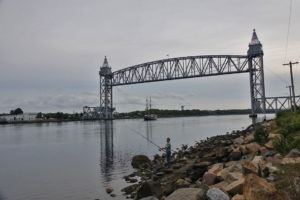 The Town of Bourne is a medium-sized community at the gateway to Cape Cod. You must pass through the town to get over the Cape Cod Canal and anywhere else on Cape Cod. Bourne is a quiet community, without the continual summer tourist crush experienced by some of the other Cape communities, which makes it an ideal place to visit. Here are some things you might not know about Bourne.

Long used by the Pilgrims during the 1620s as a center for trading activities, Aptucxet Trading Post was built in 1627, and the area was settled as a part of the Town of Sandwich by 1640, before finally being incorporated as the Town of Bourne in 1884.

The Cape Cod Canal, operated by the Army Corps of Engineers, bisects the community, with both the Bourne and the Sagamore Bridges, as well as the Buzzards Bay Railroad Bridge, being the only means to cross the canal, unless you’re traveling by boat. The canal is world renowned for its superb sport fishing, scenic vistas, relaxing bike rides & walking routes, and for carrying vessels of all sizes flying the flags of all nations.

Bourne Scenic Park, founded in 1951 and run by the independent Bourne Recreation Authority, is located beneath the Bourne Bridge along the canal, and is a perfect location for those seeking to enjoy the canal and its many activities. Bourne has numerous quiet harbors and inlets for boating and swimming, and the fishing and shell fishing in the area is particularly enticing and considered some of the most diverse in Massachusetts.

The Jonathan Bourne Historical Center is a wonderful example of the skill of well-known architect Henry Vaughan. The 1896 building, originally built to be the Bourne town library, overlooks the Cape Cod Canal. It is a fine example of American Colonial (English Renaissance) style, featuring yellow tapestry brick and red slate roof construction along with large Palladian windows. A handsome stained-glass window depicting “St. Michael and the Dragon,” by Clayton & Bell of London, England, graces the former reading room. It’s definitely worth a look for lovers of architecture.

Bourne is also home of the National Marine Life Center, an independent, non-profit, rehabilitation and release hospital for the treatment of stranded sea turtles and seals, with future plans to expand to treat dolphins, porpoises, and small whales. The Center has been steadily growing since treating its first patient in the summer of 2004, and is destined to become the primary care center and information hub on Cape Cod regarding marine animals and their environment. The well-known Massachusetts Maritime Academy is located in Buzzard’s Bay, which a part of Bourne. MMA is a fully accredited, four year, co-educational state university offering Bachelor and Master of Science degrees that are highly regarded in the worldwide maritime industry and beyond. Located on Cape Cod, at the mouth of the scenic Cape Cod Canal, Massachusetts Maritime Academy is the ideal college to pursue your love for the ocean, your concern for the environment, your interest in math and science, and your thirst for adventure.

The Bourne Stone, a 300-pound chunk of granite upon which two lines of carvings were made, continues to be a mystery to historians. It seems to have a first been used as a doorstep at the Indian Mission (or a Meeting House) established by Captain Thomas Tupper of Sandwich. Many attempts over the years have still not conclusively revealed the origin of the carver or the meanings of the markings; the last investigation was conducted in 2003 in St. Paul, MN. The stone may be seen in the museum rooms of the Bourne Historical Society in the Jonathan Bourne Historical Center, Bourne Village.

Ann Luongo is the Marketing Writer and Lifestyle Reporter for CapeCod.com, and has been writing for Cape Cod and South Shore publications for over 15 years.